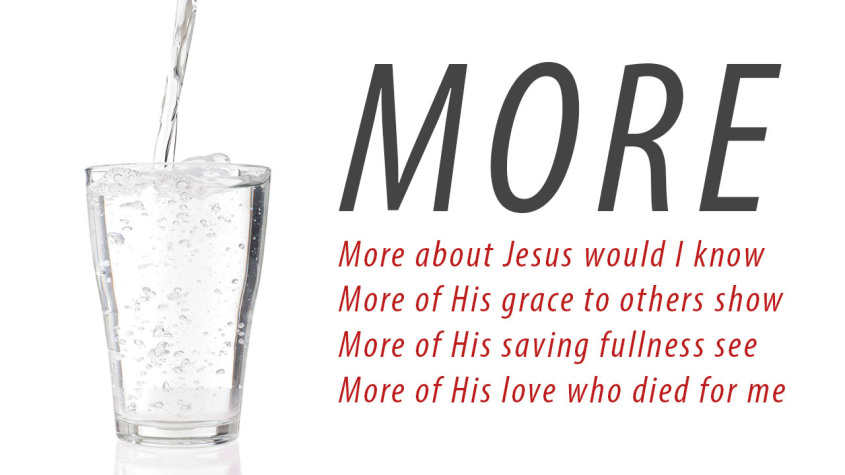 Linda and I just returned from a wonderful one-week vacation with our daughter, son-in-law, and four grandchildren.
We went to Disney World in Orlando, Florida. The weather was great, the rides were fun and the crowds were ridiculous, but nonetheless we had a wonderful time.

Our grandchildren are twelve, eleven, five and sixteen months. I knew the older three would be big enough to ride the big rides and fully appreciate all that the Disney empire has to offer. It was Caleb, the little one, I wondered about. Would it be an overwhelming assault on his senses for which there could be no adequate response or would he “get it” or at least some of it?
We found out pretty quickly he got it, or at least enough of it to want MORE.

All of our grandchildren learned the same sign language as toddlers to meet a few of their basic needs and express some of their desires. The universal sign for “more” (universal to our grandkids) is the grouping of all the fingertips of the left hand together with the grouping of the fingertips of the right hand in like manner. Then, in a sort of clapping motion, press the two groups of closely knit fingertips together repeatedly.

This motion always denotes more food, read more of the story or as in the case of Disney World, I want to ride the Dumbo ride again! (and again and again…).

And how could we loving grandparents possibly refuse such an emotional request. And it was emotional at times.
During the ride, Caleb was enthralled by the sheer spectacle of life at Disney at the lofty elevation of about twenty feet, from the inside of a flying elephant with unusually large ears! Who wouldn’t want more of that?

As the ride would begin to finish and the Dumbos began their descent, Caleb would initiate the “more” sign language.

A couple times he stiffened his body in such a way as to make one contemplate the necessity of surgical removal from the elephant’s cockpit.

He wasn’t really being defiant, he just couldn’t consider the possibility of not having more of something so wonderful.

More about Jesus let me learn
More of His holy will discern
Spirit of God, my teacher be
Showing the things of Christ to me

And now for the spiritual application:

I’ll admit to you now, but will tell my grandkids perhaps later, that I thoroughly enjoyed our vacation and all the excitement, but it was mixed with a certain bit of sadness as I daily witnessed the lengths to which many people will go to grasp a moment of fun in the midst of un-happy lives.

Linda and I enjoyed Dumbo and all the rides as much as all our grandkids, maybe more because there’s a double blessing that comes with age and perspective.

I love amusement parks; they’re amusing! However, in the midst of all the amusement there’s always the evidence of so much emptiness and unhappiness. You hear it in the raised voices, and feel it in the stress of waiting in long lines for short rides. Sometimes you can literally see the weight of burdens in the body language of those seeking a moment of relief, if not weightlessness, amidst a roller coaster’s steep plunge.

These same people live next door to you and me. We stand in lines together at the grocery store. We too deal with life’s burdens, as do they. No ride can truly lift their spirits; no amusement park can give true lasting joy. Wishing upon a star is an exercise in futility.

Faith in Christ is the only hope!

Do they see and hear in us the true thrill of life in Jesus?

Are we to them as those who get off the roller coaster just ahead of those about to embark: smiling, laughing, even screaming with a delight that makes them covet the experience?

I wonder sometimes in the privileged opportunities of fellowship, worship and teaching in our churches if our true heart response is Caleb’s more sign. Would we brace ourselves so no one could remove us from our seat or are we relieved when it’s over so we can exit quickly?

Just some questions to ponder…

I want more of Jesus and less of the world’s enticements!
More about Jesus on His throne
Riches in glory all His own
More of His kingdom’s sure increase
More of His coming, Prince of Peace

The End Is Near
Scroll to top