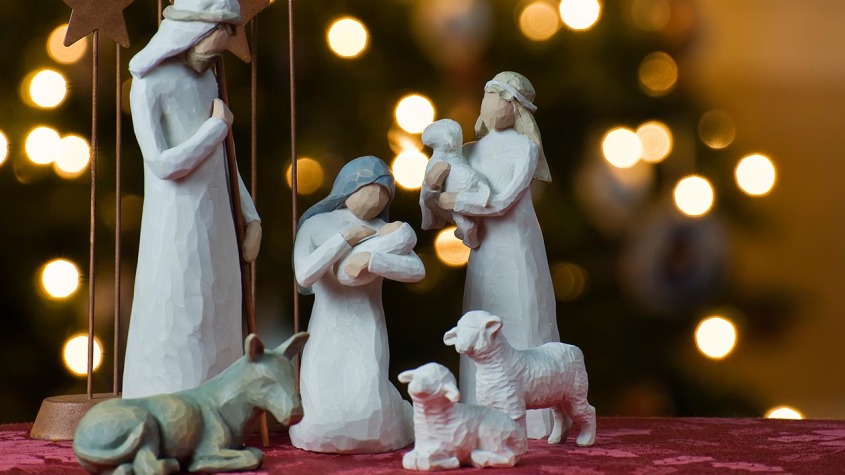 As I was reading the story of Jesus’ birth in Luke, I was struck by what an amazing moment it was when the angel Gabriel announces God’s plan to Mary.

In the sixth month, God sent the angel Gabriel to Nazareth, a town in Galilee, to a virgin pledged to be married to a man named Joseph, a descendant of David. The virgin’s name was Mary. The angel went to her and said, “Greetings, you who are highly favored! The Lord is with you.”Mary was greatly troubled at his words and wondered what kind of greeting this might be. But the angel said to her, “Do not be afraid, Mary, you have found favor with God. You will be with child and give birth to a son, and you are to give him the name Jesus. He will be great and will be called the Son of the Most High. The Lord God will give him the throne of his father David, and he will reign over the house of Jacob forever; his kingdom will never end.

Keep in mind, Mary was probably a young teenager and a virgin. As far as we know she had never seen or spoken to an angel previously. Suddenly, one of God’s chief messengers appears to this young girl and tells her she will become pregnant by the Holy Spirit of God and bear His son and His kingdom will have no end. What thoughts must have raced through her mind? Is this really true?

Did this really happen? What will Joseph do? What will my family and all the people say?

I would imagine a mix of panic and almost uncontainable joy raced through her being simultaneously.

Is this not in a way akin to our own salvation experience. When I was saved I realized the awesome fact that God was speaking to me by His love through conviction. I too questioned whether this was real or just my emotions. I thought about others and what they would say and do if I allowed this re-birth to transpire. Would I agree to His Son living in me?

Mary’s ultimate response to God was, “be it done to me according to your word.” In receiving Christ through the salvation experience we too are saying, “Thy will be done.”

My point in proposing the similarity of these experiences is not to draw some particular parallel between the Virgin Mary and ourselves, but rather to ask the question, has God spoken to us so profoundly and specifically recently?

All through scripture God speaks to people, often in amazing ways. God spoke to Adam and Eve in the garden. God spoke to Abram and gave him instructions where to live and later in His old age spoke the promise of a child and an inheritance. God told Noah to build a boat. He spoke to Moses in a burning bush. Isaiah overheard God speaking and as a result asked to be sent. Many heard God say, “Thou are my son…” when Jesus was baptized by John. Peter, James and John heard God on the mount of transfiguration. Saul heard God on the road to Damascus. On and on we could go. Down through centuries and up to today many testify of hearing God’s voice.

If you’re like me sometimes you wish you could have one of those burning bush conversations so you could be absolutely sure, due to the supernatural circumstances, that it must be God.

Do you need for God to speak to you now? I do.

January 1st will mark forty years of ministry for me. To quote from one of my songs:

Forty years is a significant number in God’s economy. Moses was trained for forty years in the desert, tending sheep before he was ready for God’s main objective, to lead His “people” out of Egypt in to the Promised Land.

I too have a sense that all that has thus transpired is only preparation for that which lies ahead. And I have something much
better than a burning bush…so do you!

We have God’s complete revealed Word. Everything God wants us to know, historically, doctrinally and specifically in regards to all aspects of our lives, past, present and future are addressed in that book, the Bible.

We have an advocate; Him who sits at the right hand of the Father, always making intercession on our behalf; the risen Christ to whom has been given all authority in Heaven and on earth.

And we have an intercessor, the Holy Spirit who searches our innermost being and prays at levels we couldn’t articulate.

How we often wish we could have the experiences of some of those previously mentioned. But don’t you see how they longed for and by faith waited for that which was to them yet ahead in the future though now possessed by us through Christ?

In days gone by only certain priests at certain times could even approach God but now He invites us all to come even boldly into His presence and make all our requests known.

Perhaps God speaks to us in direct proportion to how much we speak to Him. I’m going to speak more to God and listen with a more sensitive ear. I will pray for you as I know you too need to hear Him in regard to the next season of your life. Please pray for Linda and me as we seek God for His plans and purposes for our lives and ministry in this coming year. To complete a portion of the song I referenced earlier:

God will always be found faithful. If we hear and obey His voice, we will have a testimony of faithfulness as well; Lord speak!

No Going Back
Scroll to top